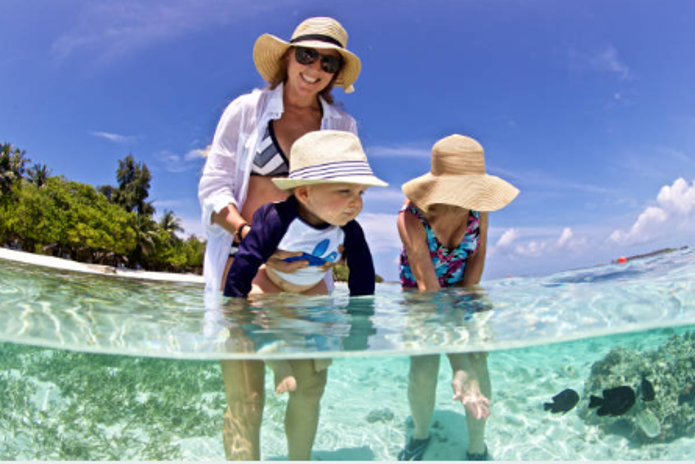 A child’s sensitive body cannot take too many chemicals, especially in the skin, so this one determined mom created a “tiny mirrors” sunscreen that actually deflects the UV rays . . . even during high noon.

What’s the first thing you thought of when you read those two words? Just hearing them sounds kind of relaxing, doesn’t it? Coral reefs . . .

But it isn’t a relaxed feeling when knowing that they are dying off at an unbelievable rate. “Eighty-five percent of Caribbean reefs have disappeared in the past fifty years,” says Dr. Craig A. Downs, lead author on a study on coral reefs. He is also the executive director of Haereticus Environmental Laboratory, which is a non-profit scientific organization that educates the public on environmental habitats in order to better protect the environment.

Many of you point the finger at such things as pollution in the air and plastic (straws), but chemicals in sunscreens are also killers.

in coral reefs around the world each year.

Chemicals in the sunscreens wash off into the water, where they are then absorbed by corals. These chemicals contain very tiny particles that are naked to the eye, but they can disrupt the coral’s reproduction and growth cycles.

In 2017, Dr. Downs and his group were part of a study at Hanauma Bay, Hawaii. They discovered that almost 2,600 daily visitors left around 412 pounds of sunscreen in the water.

In fact, one doesn’t even have to be in the oceans and seas, because the sunscreen rinses off in the shower, and some of it lands up in our (not so) blue waters.

According to the Environmental Contamination and Toxicology, about 14,000 tons of sunscreen lotion ends up in coral reefs around the world each year. The highest concentrations of sunscreen were found in tourist-filled beaches, like many in Hawaii and the US Virgin Islands.

(The Environmental Contamination and Toxicology is a quarterly scientific journal that publishes research from ecologists and other scientists on environmental health and the effects of contaminants on the environment.)

Meet Majda Ficko, the Creator of Sunblocz, a Natural Sunscreen . That is Both Kid and Coral Reef Friendly

Majda Ficko being interviewed on WTF (What’s the Future”) Health.

Majda is an environmentalist mom who is a fierce force to be reckoned with on both fronts. While she is spreading the word on having healthy products for a healthy environment, she is fighting for a healthier life for her son, Demitri, who was born with a rare syndrome called Cornelia de Lange. This left him severely mentally and physically disabled.

Demitri suffers from skin rashes, and every product Majda tried either didn’t help, or he had bad reactions from. “He was always in pain,” said Majda. “I never had a solid night sleep . . . I was desperate, so I decided I had to make something myself. I found a research chemist, and worked with her for two years to make a perfect product to help Demitri. It not only healed his diaper rashes, but it also helped with heat rash, eczema, dry skin, bug bites and cold sores.

“I never intended to sell the cream . . . my research chemist and I just formulated it for Demitri . . . but the cream worked so well that Demitri’s doctor encouraged me to sell it so that it can help other parents. I call it Baby Butz.”

Since then, many doctors from both Canada and the United States has requested samples for their own patients.

Because they didn’t want any chemicals in their children’s skin, many parents on social media, mommy bloggers and elsewhere, were posting that they were making their own safe sunscreen using the Baby Butz cream mixed with 50% coconut oil.

Majda told her chemist this, in which the chemist then asked if she was going to make a sunscreen. Well, since there were so few safe alternatives – that actually works more effectively – she decided to make a better, more convenient version of what parents were making.

Four years later, and ten simple ingredients that are easy to pronounce and understand, they made a natural, safe and very effective sunscreen with “tiny mirrors.”

Sunblocz has the highest allowed percentage of zinc oxide, which is 24.5%. You would be hard pressed to find natural sunscreens with that high amount of zinc oxide, along with other natural ingredients that are healthy for the body.

Zinc oxide helps protect a child’s skin by laying on the skin, and acting like “tiny mirrors” that actually reflect the harmful ultraviolet rays off the skin.

…contain the reef-damaging chemicals oxybenzone and octinoxate. The ban begins in 2021 (with the exception of prescriptions).

Key West Florida, soon followed with their own ban, which also begins in 2021.

Dr. Downs has also commented about sunscreens that are so-called “reef safe.”

The federal government requires sunscreen claims to be “truthful and not misleading,” but the term “reef safe” doesn’t have an agreed-upon definition, and therefore isn’t strictly regulated by the government.

This means sunscreen manufacturers aren’t required to test and demonstrate that such products won’t harm aquatic life, Dr. Downs commented. And even if they did and found a sunscreen that passed their test in the lab, it might still be harmful if concentrations in the water got high enough.

“Even if you have something relatively safe,” says Dr. Downs, “having 5,000 people getting into the water at a single beach, the oils from most sunscreen products can induce toxicity.”

In the past four years, Dr. Downs and his group tested over 200 sunscreens, and not a single one had passed. Until Sunblocz was tested. In 2019, Mrs. Majda Ficko was the first person to receive an Environmental Safe Certification for her all-natural sunscreen . . . that is also effective at deflecting UV rays – even during high noon.

The certification is called, appropriately enough, the “Protect Land+Sea Certified.”

Sunblocz is as safe for the earth as it is for you and your children’s skin.

In Canada, Buy Sunscreen for Adults